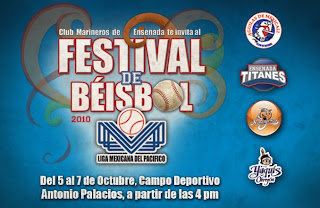 A four-team baseball festival was held in the Baja California city of Ensenada in early October on the heels of a similar event in Tijuana. The Ensenada fest consisted of three daily doubleheaders, a home run derby and autograph signings.

The Ensenada Marineros of the Mexican Northern League were the home team for the three-day round-robin tournament held October 5-7, hosting the Mexicali Aguilas, Obregon Yaquis and Hermosillo Naranjeros of the Mexican Pacific League. The Marineros won the LNM pennant last summer by defeating Guaymas in the title series in five games.
Marineros president Juan Arellano, who organized the festivities, said, “We spent one year trying to bring a baseball event for the people of Ensenada with teams from the Mexican Pacific League.” Mexicali manager Dave Machemer added, “I’m very happy to be here in Ensenada.”
Posted by Bruce Baskin at 12:01 AM