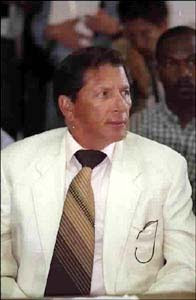 The Tabasco Olmecas of the Mexican League have named Raul Armando Cano as the team’s general manager for 2011. Cano replaces Jorge Calvo, Jr.

The 64-year-old Cano only played three seasons with the Diablos Rojos from 1967-69, but has had a long managerial career in the Liga, showing a career record of 924-923 after 14 seasons as a skipper. His last year running a team was in 2005, when he led the Tijuana Potros to a 64-46 mark.
Cano is no stranger to baseball in Tabasco. In 1979, he managed the then-Plataneros to Tabasco’s first LMB playoff berth with a team featuring players like Rommel Canada, Hector Madrigal, Joel Serna and former Boston Red Sox pitcher Mike Nagy. The Plataneros fell to Puebla in the first round, however, and did not appear in the postseason for several years.
The modern-day Olmecas last went to the playoffs in 2007.
Posted by Bruce Baskin at 7:42 PM