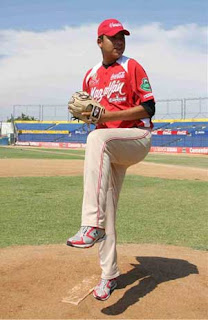 The bidding war for a highly-sought teenaged pitcher from Mazatlan appears to be over. The Pittsburgh Pirates announced August 19 that they have reached an agreement to acquire the rights to 6’4” right-hander Luis Heredia from the Veracruz Rojos Aguilas of the Mexican League for a reported $2.6 million (three-quarters of which will go to the Aguilas).

Ten major league organizations were said to be interested in Heredia, who had to wait until his 16th birthday on August 19 before MLB teams could begin negotiating with him in earnest, but Pittsburgh apparently had the inside track from the beginning. Pittsburgh's Mexican scout, Jesus “Chino” Valdez (former GM of the Mexican Pacific League Mazatlan Venados) has known Heredia since the pitcher was 5 years old and is said to be a father figure.
Heredia reportedly possesses four pitches, including a 95 MPH fastball. Once the deal is finalized, the Pirates will send him to their main training complex in Bradenton, Florida.
Posted by Bruce Baskin at 7:34 AM