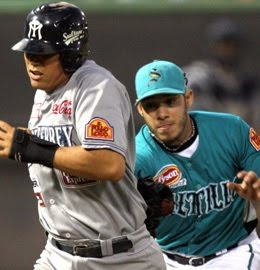 A seven-run explosion in the second inning propelled the Saltillo Saraperos to a 14-3 win over the Monterrey Sultanes Thursday night in Game Five their Mexican League Madero Zone final series. The defending LMB champions are now one win away from a berth in the Liga Championship Series as 15,721 fans watched in Saltillo’s Parque Francisco I. Madero.
Monterrey actually had a 1-0 lead after Chris Roberson came home on a Hector Rodriguez wild pitch in the top of the first, but Rodriguez settled down to go seven innings and giving up two runs to run his playoff record to 4-0 with the win. Not that he had a lot to worry about after that second inning in which his Saltillo teammates racked up seven tallies. Monterrey starter Edgar Gonzalez started the frame by walking the first three Saraperos batsmen he faced before giving up a grand slam homer to Jonathan Aceves. Gabriel Martinez added a two-run single and then scored from first on Refugio Cervantes’ double. Amazingly, Gonzalez pitched to all ten Saltillo batters that inning, but was gone in the third.
Monterrey’s Roberson scored on a Heber Gomez double in the top of the third, but it just wasn’t the Sultanes night as Saltillo racked up two runs in the fourth and five more in the fifth to make it 14-2 and essentially put the game in their hip pockets. Surprisingly, despite the lopsided final score, both teams finished with 11 hits on the night. Willie Romero and Jose Rodriguez each had three safeties for Saltillo as Romero raised his playoff batting average to .491.
Friday will be a night off before the series resumes with Game Six in Monterrey on Saturday.

PERICOS ONE WIN AWAY FROM ZONA HIDALGO CROWN AFTER 14-9 WIN
The absence of Liga batting champion Willis Otanez in the lineup since last month with a foot injury has concerned Puebla fans, but the Pericos seem to be doing reasonably well in his absence. Puebla put 20 hits on the scoreboard Thursday night in a 14-9 pasting of Oaxaca to take a 3-games-to-1 lead in their LMB South title set as 7,496 viewers jammed into Oaxaca’s Estadio Eduardo Vasconcelos.
Like the game in Saltillo, Oaxaca was ahead, 1-0, after a wild pitch by Puebla starter Guadalupe Perez let in Alejandro Gonzalez from third base in the first inning. The Pericos responded with five runs in the second after Guerreros starter Sergio Valenzuela loaded the bases with nobody out before giving up consecutive RBI singles to Miguel Torrero and Valentin Gamez to make it 2-1. Ivan Cervantes lined into a double play, but singles by Serafin Rodriguez and Ricardo Serrano made it a 3-1 game to end Valenzuela’s night and the rout was on.
The Pericos scored three times in the third to stretch their lead to 8-1, and although Oaxaca added a pair of runs in the fourth, Puebla scored six times between the fifth and seventh frames to all but put the contest out of reach at 14-3. Oaxaca did score three runs in both the eighth and ninth innings to close the gap to the final 14-9 score, but for all intent and purposes this one was done after the third.
Omar De La Torre was 4-for-5 with three runs for Puebla and both Rene Reyes and Gamez had three hits each. Gamez, filling in at first for the injured Otanez, is hitting .333 in the postseason.
Game Five is slated for Friday night in Oaxaca.
Posted by Bruce Baskin at 10:30 PM