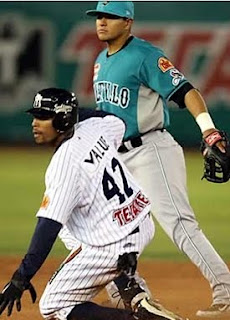 After losing their Mexican League Zona Madero final series opener to Saltillo Saturday night, the Monterrey Sultanes were in danger of losing another game Sunday before the two teams headed to Saltillo for the next three games in the set. However, a five-run outburst in the bottom of the seventh inning overcame a 2-0 deficit as the Sultanes went on to win, 5-2, tying the series at one game apiece.
As a crowd of 22,595 looked on at Estadio Monterrey, Saltillo took a 1-0 lead in the top of the second when pinch-hitter Jose Amador doubled off Monterrey starter Jonathan Castellanos to drive in Jesus Cota all the way from first base. The score remained the same until the top of the seventh, when Saraperos leadoff batter Jonathan Aceves greeted Sultanes reliever Gaudencio Aguirre with a home run to left on a 3-2 pitch to make it 2-0.
Monterrey roared back with a huge bottom of the seventh, sending ten men to the plate against five Saltillo pitchers. When the dust settled, the Sultanes had five runs on three hits, three walks and an Alejandro Garrido wild pitch on a third strike to Ramon Rios that should have ended the inning with two Monterrey runs in and the score tied at 2-2. Instead, the bases were loaded for Chris Roberson (pictured sliding into second), who promptly drilled a bases-clearing double to left field, making it a 5-2 contest. From that point, pitchers Pablo Menchaca and Julio Manon held Saltillo hitless the rest of the way to complete the comeback win.
Saltillo leadoff batter Willie Romero went 3-for-5 as the Saraperos actually outhit the Sultanes by a 9-to-5 margin. Romero is now hitting .442 for the playoffs. Menchaca was given the win for Monterrey while Thomas Melgarejo was tagged with the loss.
Game Three of the LMB North finals is slated for Tuesday night in Saltillo.

TAPIA HOMER KEYS PERICOS WIN OVER OAXACA IN LMB SOUTH FINAL OPENER
Starting pitchers Sergio Valenzuela of Oaxaca and Lorenzo Barcelo of Puebla both posted good performances Sunday night, but it was a Cesar Tapia three-run homer off Valenzuela that was the difference-maker in the Pericos’ 6-2 win over the Guerreros before 8,112 fans at Peubla’s Estadio Hermanos Serdan in the LMB South finals opener.
Barcelo earned the win with 7.1 innings of two-run pitching while scattering seven hits and a walk, tossing five shutout frames before allowing two Oaxaca scores in the sixth. For his part, Valenzuela was sailing along, allowing one Puebla run in the second before trouble struck in the fifth. With one run already in, Valenzuela intentionally walked Rene Reyes to pitch to Tapia…not necessarily a bad move as Reyes finished the night 3-for-3 to lift his postseason batting average to .609. But Tapia is hitting .480 in the playoffs himself, and he launched the second pitch over the left field wall to give Puebla a 4-2 lead and the Pericos never looked back.
The Guerreros and Pericos will meet again for Game Two Monday night in Puebla.
Posted by Bruce Baskin at 9:52 PM