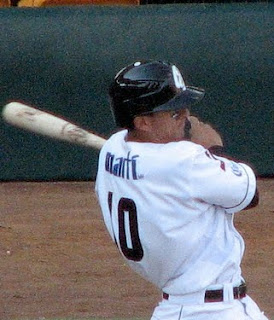 The Oaxaca Guerreros will take a two-game lead in their best-of-7 playoff series to Cancun after winning their second consecutive Mexican League Zona Hidalgo semifinal game Thursday night. The Guerreros topped the Quintana Roo Tigres, 9-5, before 5,950 fans at Oaxaca’s Parque Eduardo Vasconcelos.
Second baseman Jaime Brena (pictured) swung the big stick for the Guerreros, going 3-for-5 with a triple and three RBIs. Brena, who celebrates his 30th birthday on Friday, batted .345 in 86 games for Oaxaca during the regular season. He singled in the first inning, singled in Victor Mercedes in the fourth, and broke open a 4-4 tie in the fifth by bringing Jolbert Cabrera and Christian Quintero on a long line-drive triple past Quintana Roo center fielder Alex Sanchez.
The Guerreros went on to score five runs in the frame as starter Sergio Valenzuela and four relievers combined to allow just one Tigres run (a Jaime Trejo tally on a seventh-inning sacrifice fly) the rest of the way. Sanchez went 3-for-5 at the plate for Quintana Roo while Iker Franco had a pair of hits and three RBIs.
Valenzuela got the win for Oaxaca despite a shaky 6.2 innings in which he gave up five runs, including a two-run Franco homer in the third. Tigres starter Francisco Cordova absorbed the loss by letting in seven runs on eleven hits over 4.2 laborious innings on the hill.
After Friday’s travel day, the series will resume Saturday with Game Three at Cancun’s Parque Beto Avila.

WILD PITCH SCORES WINNING RUN, YUCATAN EVENS SERIES WITH 6-5 WIN
In a game that featured eleven runs and twenty hits between the two teams, it was a run scored on an eighth-inning wild pitch that gave Yucatan a 6-5 win in Puebla to even their LMB South semi series at a game apiece. A crowd of 6,778 witnessed the battle at Puebla’s Estadio Hermanos Serdan.
With the score tied 5-5 going into the top of the eighth, Pericos reliever Jose Cobos walked the first two batters he faced, Raul Sanchez and Said Gutierrez. Both runners moved up 90 feet when Sergio Palafox executed a perfect sacrifice bunt. With Heriberto Salas at the plate, Cobos uncorked a wild pitch that brought Sanchez in from third to score the eventual game-winner. Leones closer Joel Vargas came in with one out in the bottom of the eighth and held Puebla scoreless the rest of the way to earn the save.
Salas drove in three runs and was one of three Leones batters to collect two hits as all nine Yucatan safeties came on singles. Ricardo Serrano belted a two-run homer in the fifth for Puebla while Luis Suarez crashed a solo shot in the seventh for the Pericos. Reliever Heriberto Ruelas picked up the win for Yucatan while Cobos’ costly eighth inning for Puebla earned him the loss.
Both teams will use Friday to move on to Merida for Game Three in the series on Saturday.

MONTERREY, SALTILLO TO HOST LMB NORTH PLAYOFF GAMES FRIDAY
The Monterrey Sultanes will attempt to go ahead by three games in their series with Chihuahua at home Friday at the same time the Saltillo Saraperos will try to break a 1-1 deadlock with Mexico City in the comfortable confines of Parque Francisco I. Madero.
The Monterrey-Chihuahua series moves into 27,000-seat Estadio Monterrey, the largest baseball park in Mexico, for Games Four through Six (if needed) this weekend after the Sultanes opened Zona Madero set this week with a pair of road wins in Chihuahua.
Saltillo and Mexico City split their two games at Foro Sol. Saltillo is the defending Liga champion, but the Diablos Rojos are rated by many as the team to beat in this year’s postseason.
The Diablos won the Triple Crown of team batting in the LMB this summer, leading the league in hitting (.322), homers (110) and RBIs (617). In all, seven Liga teams batted .300 or better during the regular season while another six topped the .290 mark.
Posted by Bruce Baskin at 11:22 PM