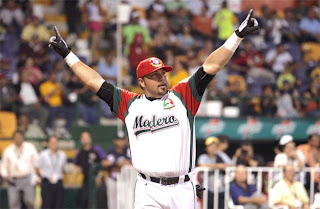 One day before the All-Star Game, Saltillo’s Refugio “Cuco” Cervantes defeated Mexico City’s Japhet Amador, 5-4, in the final round to win the 2010 Home Run Derby in Chihuahua. Cervantes and Amador (the Liga’s co-Rookie of the Year for 2009) beat out six other sluggers to reach the final round.

After the event, an exhausted Cervantes told the press, “I’m very happy. I put out all the desire and this was the result.” Cervantes added that getting rhythm into your swing is crucial for this kind of competition. The Saltillo first baseman has 11 homers in 64 regular season games while Amador has rung up eight dingers for the Diablos Rojos.
Just before the Home Run Derby began, Puebla slugger Willis Otanez (the defending Derby champion and one of the first round contestants this year) led a tribute to the late pitcher Jose Lima, a fellow Dominican who died recently at the age of 37 from a massive heart attack. Lima, who won 21 games for Houston in 1999, pitched for Saltillo in 2007, going 13-4 with a 3.40 ERA.
Posted by Bruce Baskin at 7:12 AM