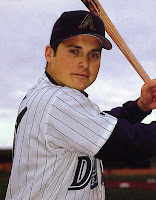 If Karim Garcia starts his Korean Baseball Organization season slowly because he’s “tired,” wait’ll he catches his breath. The Obregon native has reportedly endured some criticism among Korean fans and media for playing winter ball in the Mexican Pacific League because he’s worn out by the time he joins the Lotte Giants for the start of the KBO season, but judging by a 7-for-7 night at the plate in a 15-12, 12-inning loss to the Hanwha Eagles on April 9, he’ll be in good shape once he gets some rest.

Garcia had a homer, scored three runs, drove in six and mustered up enough energy to steal a pair of bases in the game, in which he broke the KBO record for hits in a game. He also threw out a baserunner at home plate from his outfield position for good measure.
The former major leaguer is in his third season of Korean ball, but got off to a slow start last year, drawing complaints that he was tired from playing in the MexPac. Garcia told the Puro Beisbol website, “In my career, I’ve always played winter ball after completing the summer league. It’s like giving back to the Mexican fans who can see me play,” adding that he was tired after playing for Mexico in the 2009 World Baseball Classic.
Garcia hit .361 in 15 regular games for Hermosillo last winter before batting .239 in 14 LMP playoff games and .231 for the Naranjeros in three Caribbean Series contests.
Posted by Bruce Baskin at 12:07 PM