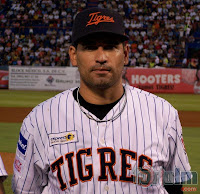 After going just 4-for-26 that first season, Martinez went on to play with Cancun through 2003 (minus a season with Kansas City’s Class A Northwest League affiliate in Spokane in 2000) before embarking on an five-year LMB odyssey that took him to Laguna, Aguascalientes, Veracruz and Tijuana before returning to Quintana Roo last season. His best season came in 2005 with Laguna when he batted .334 with 11 homers and 16 stolen bases for the Vaqueros in 95 games. Martinez hit .372 for Aguascalientes one year later, but only had two homers and 7 steals.
Martinez, who plays winter ball with Navojoa in the Mexican Pacific League, hit .296 in nine games for Mexico at last year’s Baseball World Cup in Europe.
Posted by Bruce Baskin at 8:56 AM