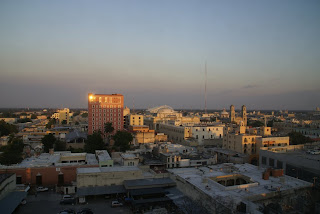 The next-to-last stop on our Mexican Baseball Road Trip is Merida, Yucatan, home of the Mexican League’s Yucatan Leones. Merida is located in northwest Yucatan about 22 miles south of the Gulf of Mexico. According to the 2005 census, Merida has around 781,000 residents, making it Mexico’s 12-largest city.

Merida was first settled in 1542 by Spanish conquistador Francisco de Montejo, although the site had actually been a center of Mayan activities for centuries prior to the arrival of the Spaniards. In fact, it was known as “The City of Five Hills” because of the presence of five pyramids built by the Mayans. As a result, many historians consider Merida the oldest continuously-occupied city in the Western Hemisphere. Carved Mayan stones were used to build Spanish colonial buildings that are plentiful in downtown Merida, and much of the local architecture comes from the colonial period of the 17th and 18th centuries. Like Campeche to the west, Merida was a walled city in response to periodic revolts by the indigenous Mayans. Some of the old gates remain, but Merida has evolved into a modern city.

As the cultural capital of the state of Yucatan, Merida offers visitors many things to do. There are numerous museums, art galleries, theaters, shops and restaurants in town. It should be noted that food in Yucatan is far from what the rest of the world calls “Mexican,” with influences from Mayan, Caribbean, European and Middle Eastern cultures creating an entirely unique cuisine. Merida has a symphony orchestra and the Jose Peon Contreras Theatre featured jazz, opera and classical music. The Paseo de Montejo is dotted by several original sculptures, and the MACAY Museum annually exhibits new sculptures for ten months.

The Yucatan Leones play their home games at Parque Kukulcan, a 13,600-seat ballpark that opened in March 1982, and the team is usually among the leaders in LMB attendance figures. Parque Kukulcan is a pitcher’s park, with the Gulf of Mexico marine air from 22 miles to the north combining with fairly deep outfield dimensions to limit fly balls that would be homers in other Mexican stadiums to warning track outs in Merida.

The Leones have appropriately tended to build their teams around pitching and defense over the years and as a result, Yucatan has been a perennial Liga playoff entry. The Leones have won three Mexican League pennants, in 1957, 1984 and 2006. Last season, Yucatan had a 68-38 regular season record, but was upset by Puebla in five games in the Southern Zone semifinals. Fernando Alejos led Leones batters with a .355 average while Edgard Clemente (son of the late Hall of Famer Roberto Clemente) topped Yucatan with 10 homers despite only playing 59 games before being dealt to Reynosa. Javier Martinez led the pitching staff with an 11-2 record and a 2.95 ERA.