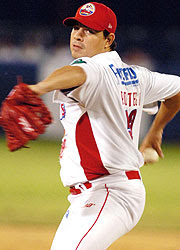 Christian Quintero was 3-for-4 with a solo homer and two RBIs while Ruben Rivera cracked a two-run bomb to help the Mazatlan Venados take a 5-3 win over the Hermosillo Naranjeros on January 22 in the opening game of the Mexican Pacific League Championship Series.

Pablo Ortega (pictured), who led the LMP in wins and earned run average during the regular season, let in three runs on seven hits over 6.2 innings for the Venados. Three relievers combined to hold Hermosillo hitless the rest of the way as Randy Williams picked up the save before a crowd of 15,110 packed into Mazatlan's Estadio Teodoro Mariscal.
Hermosillo jumped out to a 3-0 lead in the top of the first on a two-run double by Luis Alfonso Garcia and an RBI single by Humberto Cota, but Ortega settled down after that. Quintero’s homer in the third put the Venados on the scoreboard, but it was a four-run fifth inning keyed by Rivera’s blast off Naranjeros starter Edgar Gonzales that sealed the deal.
Game 2 was set for Saturday in Mazatlan before the series shifts to Hermosillo.
Posted by Bruce Baskin at 9:41 AM