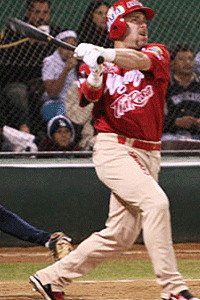 Mazatlan stayed at home for the first two games of their semifinal series with Obregon, winning both contests.

Jon Weber (pictured) cracked an RBI double in a three-run third inning to aid the Venados’ 4-1 win over the Yaquis in the January 12 opener. Starter Jasiel Acosta went to 2-0 in the postseason by pitching six innings of two-hit, one-run ball. Luis Terrero’s homer scored the lone Yaquis run.
One night later, Mazatlan whitewashed Obregon, 7-0, as Pablo Ortega notched his second playoff win with seven innings of three-hit pitching. Reid Brignac had two hits and three RBIs for the Venados while Weber went 3-for-5.
The series shifted to Obregon for as many as three games there beginning January 15.
Posted by Bruce Baskin at 12:00 AM