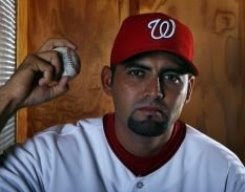 It hasn’t been the best of times for reliever Luis Ayala the past several months. After being cut by the Minnesota Twins and going into a free agency winter after getting rocked while pitching for the Washington Nationals, Ayala joined the Culiacan Tomateros after signing a minor league contract with the Los Angeles Dodgers.

Now Ayala and his family appear to have been the victims of a home invasion robbery after the pitcher returned home from two first-round playoff games in Mazatlan. According to police reports, Ayala had just arrived home early Monday, January 4 after a two-hour trip up the coast when at least 15 masked and heavily-armed men forced open a door to Ayala’s home and came in. Reportedly, neither Ayala nor anyone in his family were injured during the home invasion, but were handcuffed while the intruders searched the house for valuables. The invaders are said to have taken about seven thousand dollars in cash from Ayala, who was paid $1.3 million by the Twins and Nats last season.
Ayala was 1-5 with a 5.62 ERA in 38 MLB appearances last season, and has a 29-39 lifetime record in six major league seasons with a 3.67 ERA. He turns 32 on Tuesday, January 12.

Let’s hope his birthday party comes off without incident.
Posted by Bruce Baskin at 6:32 PM