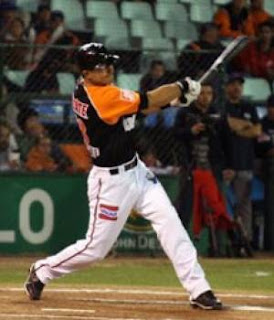 After winning the first two games of their Mex Pac Final Four set at home, the Hermosillo Naranjeros punched their ticket to the Finals by winning twice on the road in Culiacan to close out their four-game sweep of the Tomateros last weekend.

League home run champion Luis Alfonso Garcia slashed a two-run single in the ninth inning to give the Orangemen a 5-4 victory on January 15. Jose Mercedes pitched six solid innings for Hermosillo, who also got a 3-for-3 night and an RBI from Nelson Teilon as well as three hits, a run and a ribbie from Jesus Cota.
Hermosillo finished their broom job with a 3-1 triumph on January 16, thanks to 2009 Mexican League co-Rookie of the Year Juan Pablo Oramas, who allowed one run and scattered three Culiacan hits over seven frames. Vinny Castilla (pictured), whose 320 big league career homers are the most ever by a Mexican player, crashed a roundtripper for the winners. Veteran second baseman Carlos Gastelum rapped an RBI double for the Naranjeros, who recorded eight wins in ten games over their first two rounds of postseason play.
Posted by Bruce Baskin at 9:34 AM