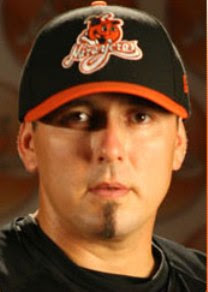 After three games, it looked like all the Hermosillo Naranjeros had to do was show up to knock out Navojoa and move into the second round. Instead, the Mayos won two straight games to make a fight out of this series, which shifts back to Hermosillo this weekend.

Hermosillo won the opener at home by a 4-3 score as Humberto Cota (pictured) knocked out a two-run homer to support starter Edgar Gonzalez, then followed with a 3-2 win behind seven innings of one-run pitching by Travis Blackley. After the Naranjeros beat the Mayos, 12-7, in Navojoa as Cota smashed three homers, the regular season champs held a 3-0 series lead.
The Mayos clawed back with a pair of wins, bopping Hermosillo, 9-5, last Wednesday and taking an 8-3 win on Thursday. Amaury Cazana hit a grand slam in Game 4, while Raul Lopez knocked out a three-run bomb in Game 5. After scoring just five runs in the two games on the road, the normally light-hitting Mayos exploded for 24 runs in three games at home.
Posted by Bruce Baskin at 6:39 PM