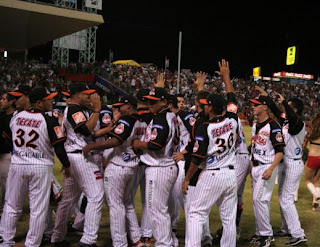 Hermosillo opened their Mex Pac Final Four series against Culiacan with an 8-5 victory over the Tomateros at home on January 12. Former MLB All-Star Vinny Castilla homered, tripled and drove in two runs to pace the Naranjeros, who also got roundtrippers from Luis Alfonso Garcia, Nelson Teilon and Jose Luis Sandoval. Luis Cruz homered twice for Culiacan.

In Game 2, Hermosillo starter Juan Delgadillo let in one unearned run on three hits over 6.1 innings, Garcia doubled twice and scored a run and Jacob Cruz posted two hits with an RBI to put the Naranjeros up, 2 games to 0, with a 4-2 win over Culiacan. Alex Sanchez singled twice, walked and drove in a run for the Tomateros.
The series moved to Culiacan for Game 3 on Friday, January 15.
Posted by Bruce Baskin at 11:58 PM