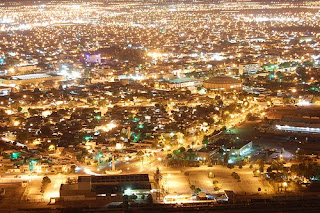 The tenth leg of our 24-city Mexican Baseball Road Trip takes us from Chihuahua 264 miles south in a straight shot on Highways 45 and 49D to the cities of Torreon, Coahuila and Gomez Palacio, Durango, otherwise known as Laguna. Laguna consists of about 1.3 million residents, including a workforce of nearly 400,000 people mostly in industry and commerce. The two cities and states are separated geographically by the Rio Nazas. The climate is dry and warm, since Laguna is located on a basin within the Chihuahuan Desert. Ironically, the two lagoons the region was named after have both dried up.

Torreon, a city of 1.1 million people where the Vaqueros actually play their home games, was named after a large tower built by Don Leonardo Zuluoaga in 1850 to watch over the Rio Nazas. Across the river, the city of Gomez Palacio has about 300,000 residents. The Laguna region was devastated by the heavy fighting in the Revolution of the early 20th Century, but has since become a notable nationwide center for cotton, livestock, mining and the wine industry.
Culturally, there are 11 universities and technical colleges in the Laguna area, and the Absalom Music Center is a well-respected musical academy. Also, the Teatro Isauro Martinez is considered one of the most beautiful theaters in the country. There are a number of local landmarks, including the Cristo de las Noas, the third-tallest statue of Jesus Christ in Latin America (smaller only than similar statues in Brazil and Colombia). Two of the most popular events in Laguna are the September Cotton Fair, which features an assortment of cultural events including music and bullfighting, and the Laguna DrumFest, which brings some of the best drummers from Mexico and abroad together at the Teatro Nazas for two days of percussion in October.
Laguna has a long history of baseball in the Mexican League, with the Union Laguna team winning Liga pennants in 1942 (under Hall of Fame player-manager Martin Dihigo) and in 1950. The 2009 edition of the Vaqueros finished 55-51 in the regular season and shocked the defending champion Mexico City Diablos Rojos in the first round of the playoffs before losing to Saltillo in the Northern Zone final.
For a while, the team played its home games at the former Colt Stadium, which served Houston’s National League team between 1962 and 1964 before the Astrodome was completed. Colt Stadium sat unused in the Astrodome parking lot before the grandstands were broken down and moved in sections to Gomez Palacio in 1970 after the Laguna team bought the remnants of the ballpark for $100,000. Colt Stadium reportedly still stands as part of a public playground. Presently, the Vaqueros play their home games in Torreon’s 12,000-seat Estadio Revolucion.
NEXT ROAD TRIP STOP (#11): Monclova, Coahuila
Posted by Bruce Baskin at 2:42 PM