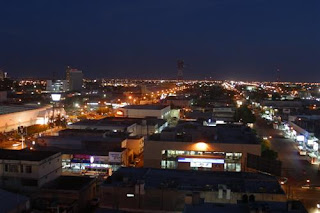 We’ll continue our journey through Mex Pac cities by heading north on Highway 15 from Navojoa to Ciudad Obregon, Sonora’s second largest city with a population of 450,000. While the city itself is less than 100 years old, the area it sits in had long been settled by the Yaqui Indian nation after whom the local baseball team was named. Originally known as Cajeme when it was given municipal status in 1927, the city was renamed in 1937 after Revolution hero General Alvaro Obregon, a Navojoa native who later became president of Mexico and initiated modern agricultural techniques to the Yaqui Valley that made the region one of the most prosperous in the country. In fact, the area is called Mexico’s grain provider thanks to wheat growing standards partly established by Nobel Prize-winning scientist Dr. Norman Bourlaug from America.

Present-day Obregon is the agribusiness center of a region whose countryside is liberally dotted with grain elevators, storage silos and cotton mills. While it is a working city and not tourism-oriented, there are some points of interest for visitors to take in. Laguna Nainari just west of town is a popular lagoon with restaurants, picnic areas and boats for water-skiing, while the nearby San Jose Beach features a spa. South of Laguna Nainari is the Parque Ostimuri, a tree-lined park geared towards young people (and the young at heart) with an amusement park, several refreshment stands and a zoo with animals ranging from deer and boars to turtles and gila monsters. The Museo del Yaquis celebrates the history of the valley and is doing its part to keep the culture of the Yaqui people alive. Moreover, the Mexican government has declared the Yaquis the only recognized tribe in the country, allowing them to continue their traditions (including their own government). There are four institutes of higher education in Obregon, and the local airport receives flight from 13 Mexican and four U.S. cities (Los Angeles, Phoenix, Tucson and Houston).

The Obregon Yaquis of the Mexican Pacific League play their home games in Estadio Tomas Oroz Gaytan, a 10,000-seat ballpark named after a state public works treasurer who helped provide funding for its construction. In fact, the ballparks in both Obregon and Hermosillo opened on October 8, 1970 and are virtually identical to each other. Past Obregon players include Willie May Aikens, Aurelio Rodriguez, Jerry Turner, Enrique Romo and Vinny Castilla (whose number has been retired). The Yaquis have won four MexPac pennants since their first season in 1958-59, playing in three Caribbean Series.