In the wake of their season openers being delayed at least five weeks due to the coronavirus panic, the Mexican League is considering options for their 2020 schedule moving forward and the Mexican Pacific League's own 2020-21 season could potentially be affected.

The LMB had planned to begin their season next Monday with defending champion Monclova hosting Monterrey, followed by a full slate of games the next evening. Instead, league president Horacio de la Vega ordered all 16 training camps closed earlier this month while pushing Opening Day back five weeks until Monday, May 11, a date not etched in stone given the uncertainty regarding efforts to combat the virus or the government's willingness to allow the LMB to have final say in their scheduling.

With that in mind, de la Vega has been trying to cobble together an alternate schedule that would save the Liga's original 102-game regular season format, something he's said he wants to do. However, that adjusted calendar could mean the Serie del Rey possibly concluding immediately prior to the beginning of the Mex Pac's regular season. In an interview with ESPN, the new league leader said, "In the scenario in which we start on May 11, we'll plan to be playing 102 games per team and finishing at the start of the Pacific season, that is, around October 12 or 14..that is the current scenario."

As noted in a Septima Entrada story, the LMB concluded their 2019 calendar on October 2, when Monclova concluded the Serie del Rey with a fourth win over Yucatan for their first pennant since entering the Liga in 1974. The LMP season opened nine days later on October 11. De la Vega says he's been maintaining contact with Mex Pac president Omar Canizales and hopes to affect the winterball circuit as little as possible, since so many players perform in both loops.

Another area of concern is the Mexican League's All-Star Weekend, originally scheduled for June 5-7 in Monclova. The event, which includes the Home Run Derby, Double Play Derby and All-Star Game, will have to have new dates assigned to reflect the late start in the overall schedule. "Let's hope that by May 11, things have improved," de la Vega told ESPN. "That's part of the conversations we've had with the different federal health authorities and we have many possible scenarios with the intention of moving forward with the 2020 season."

Meanwhile, Canizales is having to deal with similar uncertainties. A press release issued by the Mexican Pacific League league office in Guadalajara says, in part, "In these difficult times, the LMP is confident that with the efforts of the authorities and the community, this emergency can be overcome. Once this is achieved, our fans can return to enjoy baseball, for which we'll be prepared to do what the authorities dictate." The Mex Pac held an Assembly of Presidents meeting earlier in March, where the gathered leaders decided to wait to see what the Mexican league determines regarding an adjusted schedule before moving forward on their own 2020-21 calendar.

The LMP faces a possible squeeze for playing dates if the LMB season bumps up against their own, especially given the desire of both Major League Baseball and the Confederation of Pan American Baseball to have the Caribbean Series played in late January after decades of taking place the first week of February so the tournament doesn't bump against MLB's own training camps. The Mex Pac was already looking into revamping their playoff schedule before the coronavirus scare hit and may now be faced with an abbreviated regular season and/or postseason if they have to start later AND finish sooner.

Although Mexico's baseball writers have been sympathetic with the Mexican League's scheduling worries, some are calling for the summer circuit to scale back their regular season rather than push ahead with their original 102-game schedule. Puro Beisbol editor Fernando Ballesteros says "a 60 to 80-game schedule would be, from our point of view, the most sensible for the LMB. In fact, 80 is the optimal number of games that several club owners are looking for and to leave it permanently in a long-term project, but this year they did not want to be so drastic and developed the 102 games, subtracting 18 from the 2019 season."

Ballesteros added that the potential economic chaos in the wake of the coronavirus could make it more difficult for the average Mexican fan to afford to go to the ballpark often enough to make a 102-game schedule financially viable for LMB teams.

TOKYO OLYMPICS, INCLUDING BASEBALL, POSTPONED TO 2021

After weeks of speculation over whether the Summer Olympic Games in Tokyo, Japan would begin in July as scheduled, whether they'd take place in front of empty venues or be delayed to a later start due to the coronavirus pandemic, Japanese prime minister Shinzo Abe announced last week that the event will be postponed until next year.

"Due to current conditions and by all athletes, we have proposed to postpone the event for about a year so that they can be safe," Abe said during a telephone news conference last Tuesday. The International Olympic Committee and the Organizing Committee of the 2020 Olympic Games also released a statement that given information made available by the World Health Organization, a United Nations agency, IOC president Thomas Bach agreed with Abe that the Olympics should called called off for the rest of this year and instead be staged in 2021.

Baseball was on the Olympic calendar this summer as a demonstration sport after last being played at the Olympic level during the 2008 Summer Games in Beijing, where eight nations competed for the Gold medal won by South Korea.  Cuba took the Silver medal while the Bronze went to the United States.  This year's Olympics field was to be comprised of six nations, including first-time participants Mexico.

The Mexicans qualified for the Summer Olympics on the basis of their performance at last year's Premier12 tournament, sponsored by the World Baseball Softball Confederation.  Mexico won the Group A first round of the competition in Guadalajara by going 3-0 against the United States, Dominican Republic and The Netherlands, averaging eight runs per game while allowing a total of five tallies over the three contests.

The six nations that advanced from Group play then converged in Japan for the Super Round, a round-robin stage in which Mexico won their first three games before losing a pair of two-run tilts to host Japan and South Korea at the Tokyo Dome.  Mexico's 3-2 win in ten innings over the United States on Efren Navarro's walk-off RBI single in the Bronze medal game on November 17 was enough to punch their ticket to the Olympics.  Japan and South Korea, who played in the Gold medal game (won by Japan, 5-3), also qualified for the Olympics.  Interestingly, only one Mexican player, outfielder Jonathan Jones, was named to the 11-man All-World Team at the conclusion of the Premier12 while the United States placed four despite finishing out of the money.

Israel also qualified for their first Olympics appearance in baseball after pulling off a surprise win in the Africa/Europe event in Italy last September.  Two more qualifying tournaments, an Americas group in Arizona consisting of nations that fell short in the Premier12 (with the winner advancing to Tokyo) and a Final qualifier in Taiwan for the sixth and final berth, have been postponed. 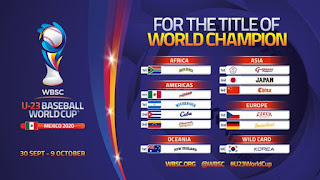 The World Baseball Softball Confederation has announced the sites of their 2020 Under-23 Baseball World Cup tournament.  Obregon and Los Mochis have been tabbed to co-host the event, which will be held between Wednesday, September 30 and Friday, October 9.  The selection was somewhat surprising in that while located in the middle of Mexico's prime baseball hotbed, the two agricultural centers are among the smallest markets in the ten-team Mexican Pacific League (only Navojoa and Guasave have fewer residents) and lack the kind of amenities offered in other Mex Pac cities like Guadalajara or Monterrey, where tournaments of this caliber typically end up when Mexico is the host country.


Even so, there is little doubt that the U23 Baseball World Cup will be embraced in both cities, partly because they rarely (if ever) see global events on this scale but mostly because fans in Obregon and Los Mochis have proven over time that they love a good ballgame.  While a schedule has not been released, it's expected that Group stage games in the 12-nation tournament will be shared between the two cities while Obregon will host later contests all the way through the October 9 final game.

Los Mochis, a city of over 250,000 not far from the Copper Canyon in northern Sinaloa, is home to the Mex Pac's Caneros, who christened the recently renovated 12,000-seat Estadio Emilio Ibarra Almada last October. The ballpark's 400 million peso facelift included a total redo of the main grandstand, which now includes three levels: lower and upper box seats plus luxury boxes. Along with Guasave's Estadio Francisco Carranza Limon, the facility is the "newest" in the LMP as the league seeks to modernize all of its playing fields and leaves Navojoa's Estadio Manuel "Ciclon" Echeverria, which opened in 1970, as the last remaining non-modern facility in the league.

Home to over 400,000 residents, Ciudad Obregon (named after Revolution leader Alvaro Obregon, who later became preident of Mexico) is near the southern tip of the state of Sonora. Like Los Mochis, Obregon is an agricultural hub and is served by an international airport (Los Mochis' is for domestic flights only). The LMP Obregon Yaquis play in the 16,500-seat Estadio Yaquis, which was completed in 2016 and is considered one of the country's nicest ballparks.


Both stadiums to be used for the U23 Baseball World Cup are symmetrical: Estadio Emilio Ibarra Almada in Los Mochis has 320-foot foul lines with a straightaway center field fence of 400 feet while Obregon's Estadio Yaquis is 325 feet down each foul line and 400 feet to center field. Players and coaches will have Class AAA-level clubhouse facilities in both venues as well.

Among the 12 nations represented at the U23 Baseball World Cup, four are in Latin America: Besides host Mexico, teams from Cuba, Nicaragua and Venezuela will compete. Asia will also send four national teams from Japan, South Korea, Taiwan and China while Germany, South Africa, New Zealand and the Czech Republic will round out the field. New Zealand replaced Australia as Oceania's delegate squad after the Aussies pulled out of their qualifying series. Professional players are allowed to represent teams at the tournament and several Mexican Leaguers are expected to fill out much of the Mexican National Team's roster, along with minor leaguers from MLB affiliates.

Mexico won the 2018 U23 Baseball World Cup in Barranquilla, Colombia under manager Jose Enrique Reyes, the first time the country had won a world championship in the sport above the Little League level. One of Mexico's three All-World Team members that year, catcher Orlando Pina, hit .294 and belted 16 homers in 90 games for Oaxaca last summer.
Posted by Bruce Baskin at 7:25 PM No comments: